Mediumship… Spiritually linking this world to the next… Discover that life continues beyond the veil called death.

You may have Spiritual Gifts… find out and develop them. Learn about the various forms of mediumship at the beautiful Acacia Centre, Murcia, Spain

There is a great deal of controversy and indeed, confusion over communication from those who have passed on. It becomes easier to understand, however, if you think of everyone and everything as being composed of a vibrating energy at different levels. When someone passes over it is simply a case of shedding the physical vibration but remaining in existence at another level. 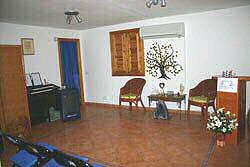 An analogy that is used very often when referring to mediumship is that of a radio station. If you are listening to Radio 2, for example, it does not mean that other radio stations are not playing. It simply means that you have not tuned in to any other station. If you play another radio in the same room and tune it into Radio one you will hear both stations playing.

These vibrations over the airwaves are there constantly. It simply needs an instrument that can tune into them in order for them to be heard (or seen as in television). A medium is one such instrument. A medium can raise or lower their particular vibration to “tune in” to other airwaves or levels and so be able to communicate information between levels.

There can be no doubt that we do indeed survive physical death and that communication is possible between the worlds. The evidence for this is overwhelming and has been well investigated and documented over the years. This evidence can take the form of physical phenomena (where people who have passed on can move objects, speak directly or even physically appear to those on the physical plane), or mental phenomena (where messages can be passed on clairvoyantly, clairaudiently or clairsentiently, by a medium).

Evidence of the survival of loved ones who have passed on should be, and almost always is, very personal to the recipient. 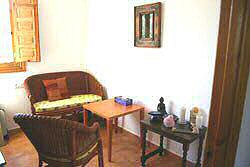 Those who have passed on do not suddenly change into angelic, all-knowing beings but very often just want to convey their love to those whom they have left behind. They can identify themselves best by showing those physical and personality characteristics that will be immediately recognised.

They almost always come back with some kind of helpful message because they are not restricted by the limitations of the physical body anymore. They can often see what is happening around their loved ones and present it as evidence through a medium

If you are interested and need more information on mediumship, please don’t hesitate to ask us.

The centre is located on the RM19 Autovia between Balsicas and Valle Del Sol, across from Polaris World La Torre Golf. Take the exit for Los Molinos and we are the first large house on the left, no8.

Rob offers private consultations via Skype. If you are interested - please click the link below and make your payment via PayPal and then Rob will email you to arrange a mutually convenient time for the reading to take place.

We use cookies on our website to give you the most relevant experience by remembering your preferences and repeat visits. By clicking “Accept All”, you consent to the use of ALL the cookies. However, you may visit "Cookie Settings" to provide a controlled consent.
Cookie SettingsAccept All
Manage consent

This website uses cookies to improve your experience while you navigate through the website. Out of these, the cookies that are categorized as necessary are stored on your browser as they are essential for the working of basic functionalities of the website. We also use third-party cookies that help us analyze and understand how you use this website. These cookies will be stored in your browser only with your consent. You also have the option to opt-out of these cookies. But opting out of some of these cookies may affect your browsing experience.
Necessary Always Enabled
Necessary cookies are absolutely essential for the website to function properly. These cookies ensure basic functionalities and security features of the website, anonymously.
Functional
Functional cookies help to perform certain functionalities like sharing the content of the website on social media platforms, collect feedbacks, and other third-party features.
Performance
Performance cookies are used to understand and analyze the key performance indexes of the website which helps in delivering a better user experience for the visitors.
Analytics
Analytical cookies are used to understand how visitors interact with the website. These cookies help provide information on metrics the number of visitors, bounce rate, traffic source, etc.
Advertisement
Advertisement cookies are used to provide visitors with relevant ads and marketing campaigns. These cookies track visitors across websites and collect information to provide customized ads.
Others
Other uncategorized cookies are those that are being analyzed and have not been classified into a category as yet.
SAVE & ACCEPT
Translate »